This is my final call to submit your application for the 2016 Washington County Reserve Academy! Get your name in by midnight on Thursday, April 30, 2015, and you’ll be on your way to one of the biggest adventures of your life!

Not sure if the Reserve Program is for you? Don’t hesitate to email me at sara_serna@co.washington.or.us with your last minute questions!

Surviving the Heat: Stress Management for the Law Enforcement Family

The senior chaplain from the WCSO instructed this class, to which the reserve candidates’ spouses and significant others were invited!

Law enforcement and corrections are career paths filled with exciting challenges and rewards, but also fraught with stress and a roller coaster of adrenaline. We encounter people on some of the worst days of their lives, whether they are victims, offenders or family members of either party. The emotionally trying situations we experience on duty can then impact our behavior at home and our relationships with loved ones.

In 2012, the National Study of Police Suicides found law enforcement officers were twice as likely to take their own life as they were to die in a traffic accident or felonious assault. Increased rates of alcoholism and divorce among peace officers are also concerns.

Our goal on Tuesday evening was to identify challenges unique to law enforcement and address possible effects on deputies and officers and their families. Entering into this career with knowledge of the emotional and psychological risks can help us more quickly identify them and seek helpful resources to stay healthy and well-balanced.

Common stressors for the average person include finances, marriage/relationship, career, and children. As with any profession, law enforcement and corrections possess their own unique stressors which can compound everyday concerns.

These strains include seeing the extremes of life, including witnessing death and serious injury, becoming involved in physical altercations, and seeing children in physical and emotional pain. We encounter the criminal “street mentality” and must understand it in order to protect the public from it. What shocks us now may become commonplace as our careers progress.

Sometimes, a peace officer may become over-invested in his or her work. This individual remains energetic, quick-witted, and able to make swift decisions while at work. Once they return home, however, their adrenaline level drops and they appear detached, apathetic, and impatient. Their whole life may begin to revolve around their police role, while other responsibilities may suffer.

We can counteract these ill effects by maintaining interests and relationships outside of law enforcement (LE). Too often, LE professionals make reference to hobbies they “used to” have or activities they “used to” enjoy. Continuing to carve out time for these pursuits early in our careers will increase the likelihood we continue with them.

We must also learn how to use our “cop off switch.” Hypervigilance has a place when we are on duty, but we need to learn to focus on and maintain healthy communication with our family and non-LE friends when we are off duty. Stress management and techniques, such as exercising, deep breathing, and spending time outdoors, can also keep us on track.

Deputies and officers often think of themselves as “fixers” who help people, but don’t ask for help themselves. Identifying a few trusted confidants and getting into the practice of sharing what is on their mind could make a significant positive impact on the emotional health of the individual. I appreciated this reminder to actively cope with difficulty rather than bottling it up.

Vehicle stops are separated into high-risk and unknown-risk categories. High-risk stops can include removing a suspect from a stolen vehicle or from a vehicle at the end of a pursuit. They also occur if law enforcement knows the driver or a passenger is an armed and/or dangerous suspect.

Most stops, however, are of unknown risk. This includes the large number of traffic stops deputies and officers make on any given day, such as the driver who runs a red light or the one whose vehicle has a broken tail light.

Safety is the number one priority when stopping and approaching a vehicle. Precautions are embedded in every stage of the process, from our preparation for a stop to the time the driver departs after the stop.

We discussed proper positioning of our vehicle and the safest places for us to stand when contacting a driver, radioing driver information to dispatch, and writing a citation. Not only must we keep an eye on the unknown individual(s) in the vehicle, we should also remain aware of traffic and pedestrians in the area of our stop.

When speaking to a driver, certain verbiage is recommended. For example, it is not advisable to give a cheerful, “Good morning!” to a driver pulled over for a traffic violation. Instead, a more neutral “Morning” or “Hi there” might be more appropriate. After all, getting pulled over might not be making this individual’s morning “good.” 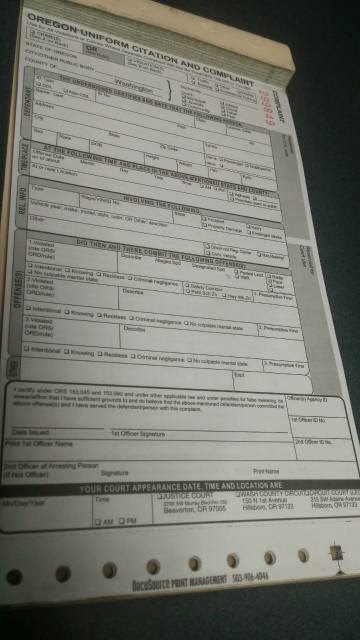 We each received a blank Oregon Uniform Citation and Complaint form to practice completing. This document is completed by a patrol deputy or officer who is citing someone for a violation or crime. Once complete, a copy is given to the violator. It provides them information about their offense, the related fine, their schedule court date, and their options for handling the citation.

Due to the potential danger of high-risk vehicle stops, it is best if a minimum of four peace officers are present. The feasibility of having multiple units respond will depend on location and jurisdiction.

Rather than approaching the vehicle, deputies or officers will stage a safe distance away, behind cover, and loudly command the driver to turn the vehicle off. He or she will obey commands to exit the vehicle and retreat backwards toward the officers. Due to the known high-risk situation, the individual will be handcuffed, searched, and placed in the back of a patrol car for the officers’ safety. 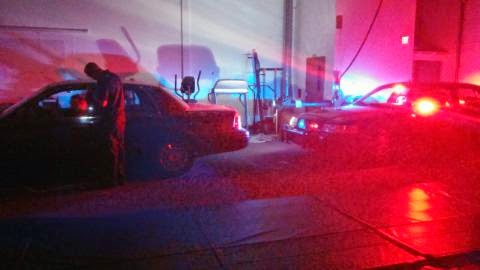 After visually confirming from a distance that no passengers remain in the vehicle, a team of officers will approach using a ballistic shield for cover. They will slowly and methodically check the entire vehicle until they can declare it clear of other passengers.

Two patrol vehicles were parked inside the mat room, and we took turns running through short vehicle stop scenarios. We each got the chance to “perform” a stop in the dark, using just our vehicle overhead lights and a flashlight for visibility.

We met at the training building on Saturday morning and outfitted ourselves in full duty gear. This was our first time being equipped with a radio, which we all turned to the same private channel so we could converse with one another realistically during scenarios.

In small teams, we worked through a few stations that allowed us to practice different skills. My team began with the citation writing station, where a patrol vehicle was staged behind a stopped passenger vehicle. 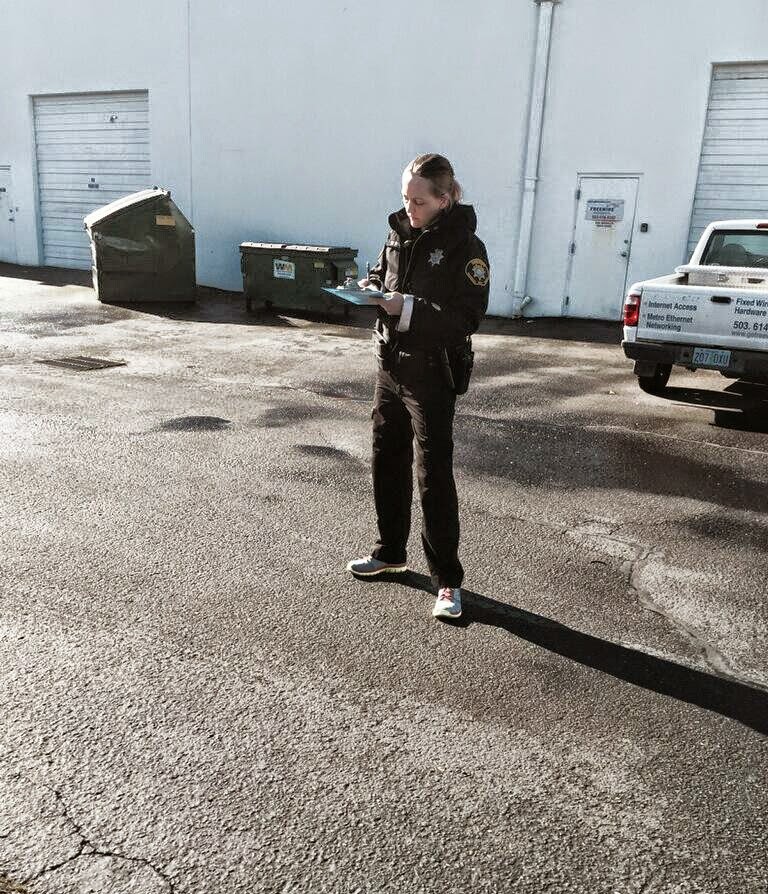 We took turns exiting the patrol car, approaching the stopped vehicle and contacting the driver to address a traffic violation. We moved to a safe position to run the driver’s license to dispatch over the radio and complete a citation form.

A second station enabled us to play either the contact officer, who engages the driver in conversation, or the cover officer, who observes the vehicle and driver from a different location and helps maintain scene safety.

The last station involved approaching a vehicle that contained both a driver and a passenger.

We moved on to high-risk vehicle stops. We rotated through four positions within each scenario. This allowed us to experience different roles, including the officer who calls out commands to the driver and the officer who intently watches the trunk and passenger side of the vehicle until it is completely cleared.

Pulling together the various skills we worked on throughout the day, we got to add driving (in the parking lot) to our exercises! Working in pairs, we hopped in patrol cars and pulled around the far side of the training building to wait for the violator’s vehicle to pass by. As soon as it did, we jumped into action.

Using my in-car radio, I communicated my location to dispatch and provided the license plate number of the vehicle I was going to stop. I then activated my overhead lights and the driver pulled over to the side of the “road.”

Parking strategically behind the vehicle, my cover officer and I quickly exited the patrol car and began approaching on opposite sides of the subject’s vehicle. I contacted the driver, introducing myself and explaining the reason for the stop. I collected the driver’s license, registration, and proof of insurance, and moved to a safe location.

I radioed the driver’s license number into dispatch and instructor responded to confirm the license was valid and the driver was clear of warrants. I moved back to the vehicle, issued a warning to the driver for his traffic violation, returned his documents, and told him he was free to go.

Our final challenge of the day was to run through a few scenarios where we pursued a passing vehicle and were unsure of what situation awaited us.

In one exercise, I played cover officer on an unknown-risk vehicle stop. Throughout the encounter, neither the contact officer nor I noticed a blue handle (training) pistol sitting above the steering wheel!

I believe we both missed seeing the firearm because we were so focused on watching the driver’s hands, to make sure he didn’t reach for a weapon. This is very important, but we must take a broader look at the individual and the vehicle.

This oversight made an indelible impact on both of us and I know we will now both do a much more thorough visual inspection on vehicles we stop.

Each situation was dynamic and the whole day was a lot of fun. Getting some practice on the multi-tasking element of traffic stops (driving safely, observing, using the radio, communicating to our partner, positioning the patrol car, etc.) was particularly helpful in building both experience and confidence.

Only eight classes left before our pre-final study night! It’s as though we’ve been running a marathon and the finish line is finally coming into view.

I sustained a knee injury at the range several weeks ago and it only recently became problematic. It turns out I have a partially torn ACL, which means I won’t be able to participate in any of the remaining physically active classes.

It is not terribly uncommon for a candidate to experience an injury over the course of the academy; they are merely examined on a case-by-case basis. Fortunately, I will be permitted to graduate with my class and I will finish up my hands-on training after I heal.

Let’s just look at this as an opportunity to “survive the heat” as we learned earlier this week!