While watching the Oscars Sunday night, I heard a quote from the movie Whiplash. “There are no two words in the English language more harmful than ‘good job’.”

I don’t wholeheartedly agree with this sentiment, but hearing it was timely. I spent a lot of time this week thinking about constructive criticism and the impact of challenging training on attitude and performance.

I ended Saturday’s class feeling proud of how often I heard the words “good job” at the range, but I’ll be going into this week’s classes with a slightly different mindset.

Tuesday night, we met the Beaverton Police Department sergeant who will be heading up our firearms training for the next seven weeks. We were all issued our duty pistols, housed safely in their hard cases.

The gun we are issued is dependent on the size of our hands. Out of three possible models, I was issued a 9mm Glock 17 Generation 4 pistol.

My classmates had a wide range of prior experience with firearms, so we started with the basics and proceeded through a firearms training manual very slowly.  I own a pistol and have some experience shooting, but I still appreciated working from the ground up.

We began with the most important components we will see in our firearms training: the four cardinal safety rules. We will be quizzed on these safety rules each time we handle our firearms.
Please note that gun safety at home is equally important, especially if you have children. I purchased a small biometric gun safe to house both my personal and duty pistols and have instructed my daughter about staying away from firearms.

Remember, even if you don’t have any firearms in your house, your child may encounter them at a friend or relative’s home.  Learn more about keeping your children safe around guns by clicking here.

If you own a firearm and need a free gun lock, stop by the Washington County Sheriff’s Office Concealed Handgun Unit between 9:00am and 5:00pm, Monday through Friday.

A recap of our use of force authority was also included. As we’ve seen in the past, many of our main training topics build on one another. The use of force protocols and guiding case law we previously covered are especially pertinent to our firearms training.

After being instructed to slowly and safely remove our pistols from their cases and set them on the table in front of us, we learned how to confirm a gun is unloaded.

This involves keeping your finger off the trigger at all times while removing the magazine, racking the slide to eject any rounds that may be in the chamber, visually and physically inspecting the firearm to confirm it is empty, and having a neighbor do the same. 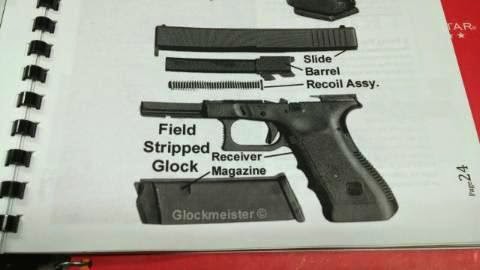 Systematically performing this same quadruple check every time we unload our firearm will help us avoid a potentially deadly error.

Last, our instructor demonstrated several techniques we would be practicing on Thursday. This included proper grip, drawing from a holster, sight alignment, trigger press, and three different ways to reload a pistol with ammunition.

Thursday night was our first chance to get hands on practice as a group. We all ensured our firearms were unloaded and no live ammunition was present in the training room. 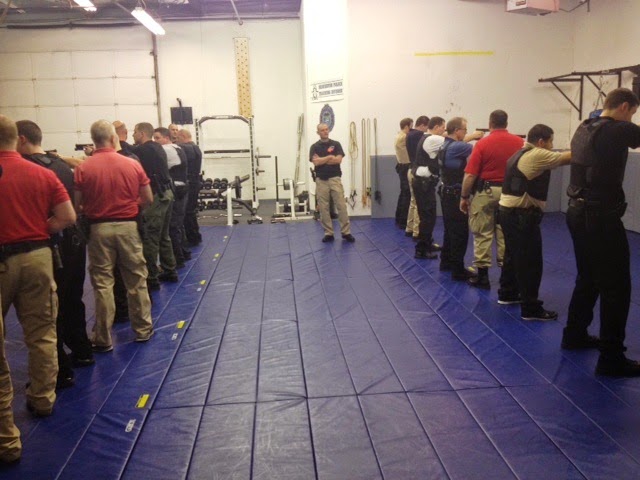 As in our last class, we started very slowly. We stood in two lines on the training mats, facing away from one another. After solidifying our stance, we worked on drawing our pistol from our holster. This process involves four distinct steps that, with practice, become a single fluid movement.

Using “dummy rounds,” which won’t fire out of the gun, we learned how to load or reload ammunition magazines into our pistols in a variety of circumstances. 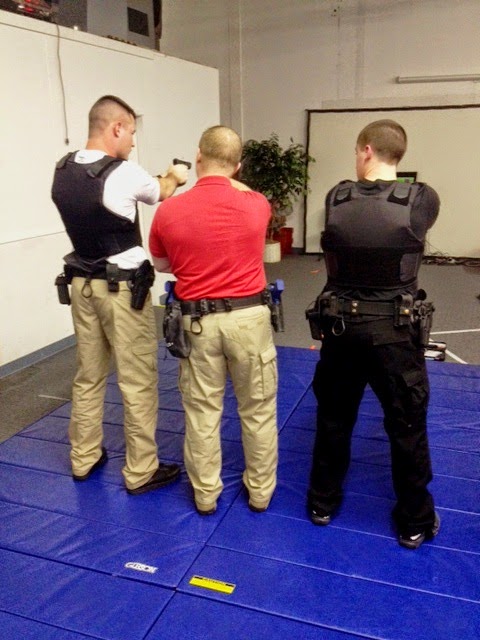 An administrative load (or unload) occurs when an instructor directs you. A tactical reload is done in the field when there is a “lull” in the action and you have time to put a full magazine into your gun. Lastly, a combat reload is done when you’re actively shooting and your pistol’s slide locks open because you’ve run out of ammunition.

We were also able to practice malfunction drills. We may occasionally press the trigger of our pistol, only to hear a ‘click’ instead of the expected ‘bang.’ If this happens, we need to mechanically perform several steps to clear the malfunction and restore our gun to working condition, quickly and safely.

The key to all of our initial training is to go slowly and work on developing proper techniques which will become automatic by the time we speed things up and work under stress.

For the past four years, I’ve been toting around my very solid and healthy daughter.

I suddenly realized the value of this on Saturday when it was time to pack up all my heavy gear and drag it out to the range early in the morning. I solicited advice from my WCSO coworkers about what to bring and set everything out the night before so I wouldn’t forget anything.  Here’s what I brought:


It was cold and cloudy when we arrived at the range. After introductions to our instructors for the day and a briefing on range rules and safety protocols, we got to work!

Our class was split into two groups who would alternate time on the line shooting. As was expected, we again went very slowly. Loaded up with live ammunition, we took our place on the five yard line and started taking single shots after drawing from the holster. We worked our way up to trying to group a series of shots as close together on the target as possible. 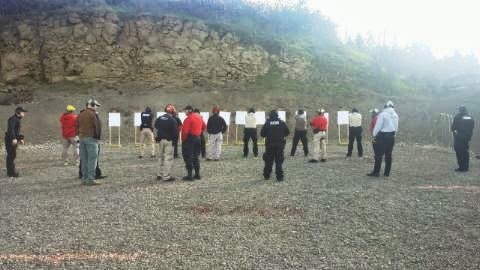 When it wasn’t our group’s time on the line, we found ourselves back at the reloading tables, stocking up our magazines with fresh ammunition. Thankfully, my boss gave me a heads up about this task months ago, so I’ve been spending time practicing this while watching television. That’s not to say my thumbs weren’t tired by the end of the day. 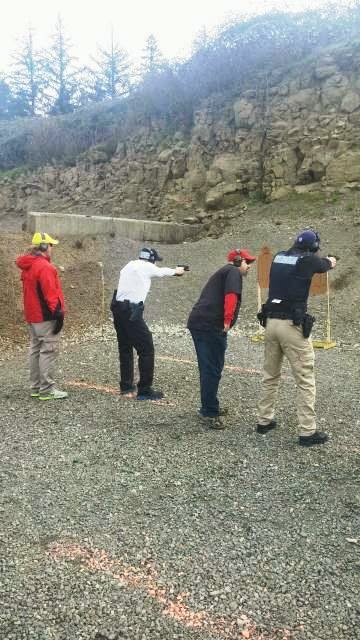 The sun soon came up and the day got warmer. It was great to be outside in the fresh air on such a beautiful day! There were so many instructors present that each candidate had a designated trainer to give them feedback all day. Having this kind of intensive, one-on-one instruction was fantastic.

During one of the exercises I got a very hot, brass cartridge (recently ejected from my neighbor’s pistol) down my shirt. We’d been instructed to keep calm and power through the searing pain instead of wildly waving our guns around. I managed to keep my cool, so to speak, and fish out the cartridge later.

We worked on the same reload techniques and malfunctions we covered in the classroom. At one point, my brain short circuited and I tried to administratively load a magazine into my pistol backwards. Yikes.

The instructors informed us we’d be ending the day on a fun note. We had a competition to see who could consecutively shoot on target while increasing the distance of their shots. I got three excellent shots in, two moderate, and then I was disqualified. The winner ended up being a classmate who hadn’t fired a gun in about twenty years!

We all did well on Saturday, from those with years of experience to those who had never fired a gun before. Hearing “Good job, Serna!” was like music to my ears and I thought, “I’m finally a natural at something!”

Having a successful academy day left me in good spirits and energized for the coming week’s classes. Then I realized that hearing “good job” doesn’t necessarily teach me anything.

A dose of encouraging feedback does serve the purpose of helping me stay positive, which is very valuable. However, I am growing and improving from the countless suggestions and corrections I hear in class, even if it’s difficult and tiring to hear criticism.

Defensive tactics have been the most mentally taxing classes for me because that’s where I receive nearly constant instruction on how to do better, be tougher, and keep fighting. This is the feedback that will ultimately force me to overcome bad habits, challenge myself, and help keep the public, other deputies, and myself safe.

One last note – congratulations to our classmate who is no longer in the academy with us because he was hired by an Oregon police agency!
Posted by Sara